(1762) BRYNODOL (Fig. II6, plates 48, 52,55, 57) is a two storeyed house with attics, mostly rebuilt in the mid-18th century.1 The name occurs in 1352,2 but the first mention of the house seems to be in connection with a branch of the Griffith family of Cefnamwlch in the 16th century;3 some of the fabric of that building probably survives, though masked by the 18th-century work. The house was visited in 1774 by Samuel ]ohnson,4who describes it as ‘new-built’.

The extent of the 18th-century work makes complete analysis of the development virtually impossible. Accounts for the years 1751-67 survive,5 but refer mainly to final fittings such as fireplaces and door furniture, but it is clear that this work followed immediately after a major reconstruction which included the staircase and extensive internal panelling.The ‘old kitchen’ is mentioned, but the only structural addition described is the ‘new kitchen’,’ which now forms the S.W. extremity of the building. Two pierced panels loose in the loft of this kitchen are inscribed, and combined read G/IM 1743/THIS HOUSE WAS REBUILT. The initials are those of John and Margaret Griffith, the parents of Hugh.

The earliest part of the house is the main (N.) block. In its present form it appears to be almost entirely of the early 18th  century, but the two cellar windows, in the W. end of the N. 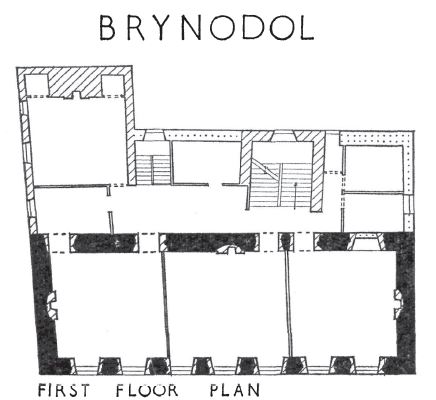 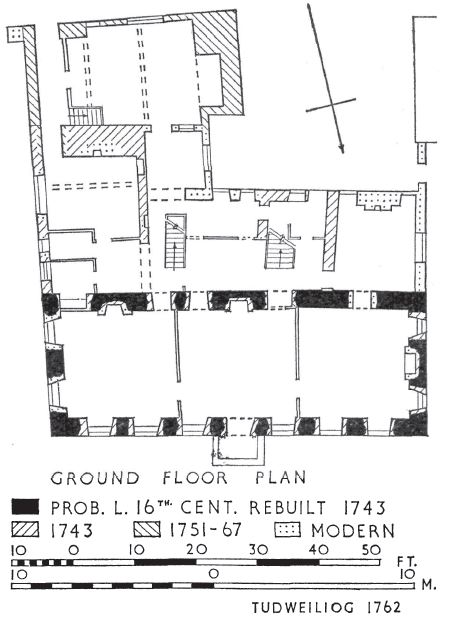 front, have stone mullions and date from ca. 1600, so this block may incorporate the original house, though its length of 63 ft. is unusual for a building of that date. The surround to the main doorway is modern but the door (Plate 52) is original. The further additions, all within the 18th century, seem to have been the ‘old kitchen’, the staircase and adjacent rooms, and finally the ‘new kitchen’ (completed 1756-7), in that order.

Internally most of the 18th-century panelling has survived, all having large plain panels above a moulded dado rail. The best preserved sections on the ground floor are in the entrance hall and in the room to the E. (Plate 57). The latter has a modern fireplace and two new windows in the N. wall, otherwise both rooms are complete including door furniture. The three first floor rooms in the main block retain their original fireplaces and most of their panelling; the larger room over the old kitchen has lost all but that on the S. wall.

The stair (Plate 55), housed in a brick wing, has a stepped string with moulded rail and turned balusters. The original lining survives on S. and W., but the E. wall has been removed and replaced by a good modern reproduction of the original balusters and strings. To the E. is a service stair of similar design, which may have been reset. In an attic bedroom near the middle of the main block is a partition formed of a
section of moulded oak panelling of ca. 1600.