House probably of the 16th century, demolished during the construction of Penrhos aerodrome in 1936. The plan and front elevation (Fig.63) have been reconstructed from photographs and from recollections of former residents. REF 2 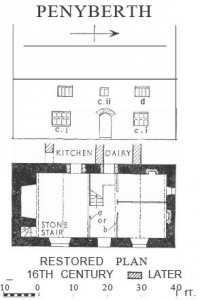 In these drawings the scale of the external dimensions and some of the internal is given by existing portions of the woodwork. Woodwork from the house is preserved as follows:
(a) at the welsh Folk Museum, St. Fagan’s Castle, Cardiff, (i) part of a post-and-panel screen, 6 ft. 6 ins. high, the sill, posts and head beam lightly moulded at the edges; (ii) fragment of head beam (Plate 59) containing heads of depressed four-centred form for a window of two or more lights, with roll-and-hollow moulds, perhaps from the south end of the first floor;

(c) at Pen-y-bont, Llanystumdwy: (i) in the two N.W. windows at ground floor, transomed frames both of three lights (one cut down from a frame of four lights), with heads of depressed four-centred form, continuous moulding,
and spandrel carving on the transom, including conventional shields between the arches, 4ft. high, formerly in
ground-floor windows at the E. front of Penyberth; (ii) in window of S.W. bay, frame of two similar lights without
transom, moulded similarly but without spandrel carving, 2 ft. 6ins. high, formerly in a first-floor window at the
E. front of Penyberth;

(d) at Maenan, Llanystumdwy: window frame of four lights, similar to (e,ii) but of bolder mould and 3 ft. high, formerly in the other first-floor window at the E. front. On the whole, these relics indicate the middle of the 16th century as the most likely period for the construction of the main block of the house. REF 3