A small fortified enclosure at about 200 ft. above a.D., at the edge of level ground on the E. of a steep-sided valley. Within the angle formed by two cliffs on the W. and S. a quadrilateral area, measuring 250 ft. N.-S. by 200 ft., is cut off from the main plateau by a system of three banks on the E. and N.E. The innermost bank, in two equal curving sections each about 150 ft. long, is built of loose stone and remains up to 3ft. high, spread to about 25-30ft., with a few large blocks of an outer facing in places. Its original width is uncertain; the appearance of a ditch outside it can be accounted for by a slight natural fall in ground level and the rise of the middle bank. A central gap 15ft. wide represents the entrance. At the W. the bank ends 15ft. from the edge of the
steep scarp at a modern break, beyond which its line is crossed by the middle bank. At the S. also, the inner bank fades out before reaching the edge, where a modern field wall has obscured the evidence. The middle bank is lighter, up to 2ft. 6ins. high, consisting of stone and earth with no preserved facing, and is recognizable
only where its outer slope protrudes (up to 10ft.) beyond the modern field wall which crowns it. There is no associated ditch. It was laid out in an even curve, passing close to the ends of the inner bank, but separated from it by 60 ft. at the centre, where there is a gap of about 30 ft., not exactly opposite the entrance in the inner bank. The middle bank may have been continued along the steep scarps at the W. and S. till sheer cliff was reached. The outer bank is preserved only as a slight swelling in the cultivated field at the N., spread to between 30 ft. and 50 ft. It extends right up to the steep scarp at the W., is parallel to the inner bank, and appears to end at an entrance opposite that in the inner bank. Its continuation on the E. has been completely ploughed down. The development of the site must comprise two periods. The inner and outer banks seem to have been
planned together, about 80ft. to 90ft. apart, as the defences of a small promontory fort. The middle bank stands alone, and is less obviously defensive. Its more sharply defined profile suggests a more recent origin, and its survival where it passes the W. end of the inner bank indicates that it superseded the latter defence, which probably originally extended to the edge along with the outer line. 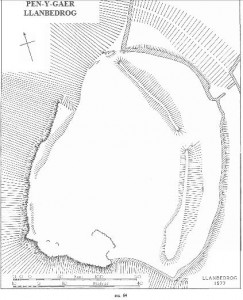