Occupies a flat-topped promontory at 200ft. above a.D., commanding the steep-sided valley W. of Mynydd Tirycwmwd.
The interior, about 110 ft. long N.-S. by about 70 ft. wide, is separated from the small plateau to the N. by a system of two ramparts and a rock-cut ditch, with a third, unfinished rampart and ditch beyond, at the edge of the steep scarp to the E. The innermost rampart evidently followed the top of naturally steep slopes on the E., S. and W., but owing to dilapidation and thick scrub cover is now only traceable around the originally level N. end as an earth bank up to 30 ft. wide and 4 ft. high; an external facing of large blocks, up to 2ft. 6inch.high, is visible on the N.E., where also the outer jambs of an entrance 3 ft. wide remain. This inner defence does not seem to have been associated with a ditch. By contrast the bank which curves around its N. and W. sides at a consistent distance of 70ft. between crests, was built of material quarried from a vertical-sided ditch, of which the outer edge is still visible to depth of 4ft. in places. The bank and ditch together reach a maximum overall width of 45
ft. and a height of 11ft. Towards the S.W., after a fall of about 30 ft., the ditch fades out into a natural re-entrant and the bank continues as a stone wall originally 7ft. thick, now spread to 12 ft., faced with large blocks to a surviving height of 2 ft.; this stone wall firmally climbs the steep slope to the S.W. corner of the inner enclosure. The third line of defence was planned with its crest a further 70 ft. from that of the second,but was not extended further than 100ft. from the edge of the scarp. It is similar to the second, being up to 60ft. wide and 12ft. high overall. Neither line had a counterscarp bank. The main approach to the site was probably up a
narrow path on the steep eastern scarp. 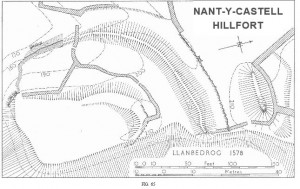