The Parish Church of St Engan stands in the village of Llanengan at the NW of the parish. It consists of chancel and nave , S aisle of the same total length, S porch and W tower. It is mainly of the late 15th century and the first third of the 16th century, the W. tower being an addition of I 534 as dated by an inscription. In the later Middle Ages the church was a popular place of pilgrimage.1

Probably the nave at the N.\XI. was rebuilt late in the 15th century on the site of the earlier church recorded from the 13th century.2 The chancel at the N.E. was added ca. 1520, the arcade and S. aisle ca. 1530. Both the chancel and the E. end of the S. aisle have gable corbels inscribed with what appear to be 16th-century dates, using black-letter for arabic numerals. The W. tower was added in 1534, and the S. porch and the double screen and rood-loft are probably contemporary with this final work. The arcade may be compared with those in Llangwnnadl Church (No.1638) and in Bangor Cathedral (II, No.681).
The church was restored in 1847 3 and further repairs were made in 1937-8.
It contains much of architectural interest, especially the screen and rood-loft, the roof trusses, and the inscriptions. 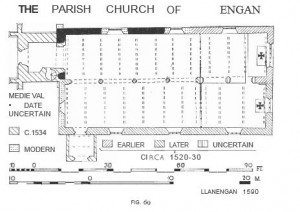 Architectural description
The walls are of roughly coursed rubble with large quoin-stones. The original dressings are of grey gritstone, the modern renewals of finer yellow grits tone. The roofs are covered with modern slates, generally on raised eaves. The lower part of the E. wall is hidden, but the N. wall of the chancel and that short length of its original S. wall which survives at the E. end of the arcade are built on a roughly sloped plinth, and the quoin-stones remain at the former S.E. corner; the straight joint there shows that the S. aisle was a later addition. The N. wall of the nave appears to be of one build with that of the chancel, but the rough plinth is limited to the latter.
This suggests that the nave walls may incorporate part of the fabric of the earlier church which is known to have existed in the 13th century. The quoins at the N.W . angle are very large, and although none remains at the junction between nave and chancel they could have been removed when the church was enlarged.

The Chancel (27 ft. by 18 ft.) has no W. arch but is separated from the nave by a screen. The E. window (Plate 17), of the early 16th century, is of five cinquefoiled lights, alternately pointed and ogee, under perpendicular and transomed tracery in a pointed four-centred head with moulded label; the jambs and reveals are splayed, and on each inner reveal is an inscription (see under Fittings-Inscription ii). The gable has hollow-chamfered copings, mostly renewed, and at the N. the original corbel, also inscribed (see under Fittings-Inscription i). The quoin-stones of both E. angles remain in situ and the wall probably stood on a roughly sloped plinth which continues visible along the N. wall, ending 4 ft. to W. of the screen. The N. window was restored in 1847, with three trefoiled lights in a square frame, ogee-moulded jambs and moulded label. Towards the S. aisle is an
arcade of two bays (Plate 15), each of two orders hollow-chamfered continuously with the octagonal pier or semi-octagonal respond, at the square base of which both orders terminate in a single splayed stop above each corner of the chamfered square plinth; the E. arch, which had been rebuilt before 1847, is now semi-circular; the wider W. arch is depressed pointed, somewhat flattened on the E., with its crown at the same height as the other, and is apparently original.

The N. truss has a cambered but plain collar-beam. Purlins are let into the principals of both trusses. The roof of the W. tower is on two trusses running N.-S. The W. truss seems unaltered, consisting of a heavy stop-chamfered tie-beam, a short strut mortised into it at the centre, and stout rafters of low pitch. The E. truss is similar but apparently it has been reconstructed, a beam with a double hollow chamfer on the soffit edges having been re-used as tie.

The Lynch-gate
(Plate 20), to S. of the church, is rubble-built and has wide openings.
It is roofed on three collar-beam trusses which utilise some 16th-century timbers, and is covered with modern slates.