Two-storeyed house probably of the 16th century. It is built of rubble and roofed with small slates; the S. gable and both chimneys have been rebuilt, but the roof and plain-chamfered eaves course appear to be original. Some of the internal arrangements have been altered and the original stone stair has been removed. Nothing is known of the early history of this house; the name has been transferred to a 19th-century house nearby. 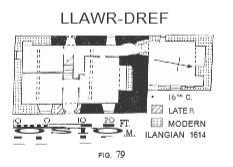 The present doorway, 3 ft. 3 ins. wide and set off-centre, has a depressed pointed arch. It is certainly an early opening, probably original, but the stones used are generally smaller than those in the blocked W. doorway. The windows on this E. front have all been altered, but that on the ground floor to N. of the door occupies an original opening. The two most southerly date from the rebuilding of the S. gable in the 19th century. During the course of this work much of the original fenestration in the W. wall was also destroyed, but two small plain windows remain, only 1ft 6 ins square. The W. (Plate 52),2 ft. 7 ins. wide, is opposite the present entrance; it has been blocked, leaving only a small window. The lower part of the N. gable has been masked by the addition of a small 19th-century kitchen, but the upper part of the wall contains traces of a small window which once lit the stair. The quoins are large and well built; the copings and the rough kneelers appear to be original. The inner jambs of the E. doorway are widely splayed and retain one of the old door crooks in the S. jamb; the head is lintelled. The interior has been altered, and all the present rooms are modern, but part of the original moulded post-and-panel screen remains in situ S. of the entrance passage. It contains two doorways with shaped heads, one to the W. (Plate 59) and the other, blocked, near the centre. The principal room on the ground floor has its original ceiling-beams, with a well formed cavetto and double ovolo mould of Elizabethan type; the joists have a simplified version of the same mould. All lack stops. The fireplace-beam is similar, with plain stops. Traces remain W. of the fireplace of a stone stair, which was re-moved to give access t:) the added kitchen. The roof is ceiled and the woodwork could not be examined closely. The S. truss is modern, but the design of the other three suggests that they may be earlier than the building, perhaps from a medieval house on or near this site. All the roof woodwork is of excellent workmanship. The first or N. truss has only a plain cambered or even cranked collar. The second has a very slightly cambered collar with two cusped struts forming a central octo foil flanked by sexfoils. The third has the same arrangement of struts but has well-formed arched braces beneath the collar. It was impossible to reach the trusses to determine whether wind-braces had been used, but none now exist.