House of two storeys and attic with outbuildings near by, probably of the 18th century. The walls of the house are of rubble roughly coursed on a base of boulders; the roof is covered with modern slates. At both gables the chimney stack is short and slightly oblong; that at the W. has high drip ledges and a slate cap; the other is rough-cast. The windows have rough stone heads and are of vertical proportion. The S. door has a straight head now plastered over. 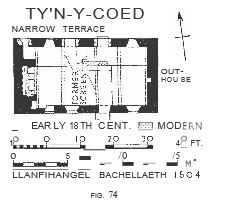 At the ground floor the ceiling beams and joists are still exposed; two beams show cuts for screens of in-and-out boarding, and some of the present partitions are of this form. The joists both on the ground and first floor are stop-chamfered. The staircase to the first floor and attic is plain and to judge from the existing fenestration has always occupied this position. East of the house is an outhouse, 20 ft. 3 ins. N.-S. by 14 ft. 6 ins. It is of similar masonry to the main house but is roofed with small coarse slates. The entrance is on the W. between two small square windows and the fireplace, now blocked, is central to the S. end. A flight of stone steps leads up beside the S. gable end to the loft. A byre of similar build stands on a platform further S.
1 Memorials at Llanbedrog Church, Gleallings, p. 71, viii (1772) and ix (1776).
Condition: good
SH30673628
3 vi 59
40NW