House of two storeys and cellar with added rear wing of one storey; perhaps of the 17th century, the former Bodgadle. 1 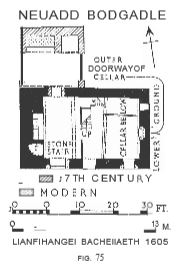 The walls, where not roughcast, are of uncoursed rubble and partly set on a base of boulders. The outer doorway of the cellar and any unaltered square windows have rough stone heads. The W. chimney stack is square and short with drip ledges, the E. stack is rectangular. The roofs are covered with small thick slates. There are roughly chamfered ceiling beams both in the main block and in the kitchen wing. A winding stone stair is said to be concealed as approximately shown 011 plan. The steps down to the cellar are of stone also. Otherwise the interior has been modernised. A late 17th- or early 18th-century outhouse, with half dormer and outside steps to the 10ft, stands in range with the western of the two sets of outbuildings.
1 The name is known from the 15th century, Griffith, Ped., pp. 166, 386.
Condition: partly modernised
SH31183566
10 vii 58
40 NW