Now a T shaped building of local rubble plastered internally. The roof, including its woodwork, is modern; the floor of the nave has been lowered, and the altar steps added. The churchyard is rectangular, which is uncommon in this area (cJ. No. 1521). 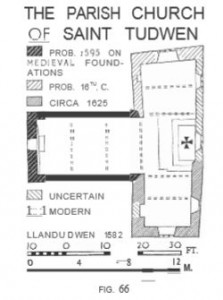 The unusual plan of the building is the result of successive reconstructions. The earliest part is the nave, which probably dates from the rebuilding recorded in 1595,1 though the asymmetry of the W. end may indicate that part of the earlier church is incorporated in it (see below). The S. transept belongs to the first quarter of the 17th century; the N. transept cannot be closely dated, but is probably of the 16th century.

Architectural description.
The Nave (28 ft. by 140 ft.) has a W. door with a plain segmental arched head. This is not centrally placed in the wall nor is it vertically below the single bell-cote which caps the gable end and which is also asymmetrically placed. Both side walls are thin and contain modern single-light windows which are probably copies of the original 16th-century ones. It is possible that the doorway was that of the earlier church, and that its asymmetrical setting results from rebuilding on a different axis in 1595, but this interpretation is unlikely, as no change is visible in the masonry and the bell-cote is also off-centre, though to a smaller extent. The Chancel now consists of the crossing space only. Originally, though, there was an extension to the E., narrower than the nave and of unknown length. Its position is indicated by the change in thickness and direction where the E. wall of the S. transept meets that of the chancel and N. transept. The South Transept (14 ft. by 12 ft.) retains its original S. and E. windows, of three and two lights respectively. The rather slight ovolo-moulded jambs and mullions resemble those in the Madrun gate-house (No. 1583) and must date from the half of the. 17th century. The actual joint with the nave is covered by a cement fillet. The W. wall contains a blocked original doorway. The North Transept (13 ft. 6 ins. by 13 ft. 6 ins.) is probably of the 16th century although it contains no ancient datable features; beneath the N. window can be seen the jambs of a narrower original opening. The E. wall is of different character and thickness from the W. wall, and is continuous with the E. wall of the chancel; the whole of this is probably rebuilt. Internally there is a small aumbry or cupboard in the W . wall; the crosses on the back and lintel are modern or recut.
Fittings.-Books:see registers,p. cxxxiv. Font (Plate 25): slightly tapering octagonal gritstone bowl 2 ft. ins. wide at top, 2 ft. 5 ins. at bottom, 1 ft 3 ins. high; medieval.
Memorials: (i) stone slab in N. transept, to Gaynor Grifftth of Nyffryn, 1670; (ii) slate slab in S. transept, to Owen Williams, 1733. Plate: (i) Silver chalice (Plate 38), with rather shallow rounded bowl on hexagonal stem and foot; a little above the middle of the stem is an hexagonal knop; each face has a projecting lozenge chaced with a rosette, and containing some of its original gilt; the foot flares towards the incurved sides of the hexagon, the edges of which are moulded and the points of which have leaf-like discs (one missing); one facet of the foot is engraved with a Crucifixion, the arms being drawn above the head so as to fit the compartment. Without maker’s mark but probably ca. 1500. 2 Height 51 ins. (ii) Silver paten (Plate 38), a saucer-like dish with punched ornament, fluted between the rim and a circle in the base, with rosettes or bosses at the ends of the fluting; within the circle a plain shield at the centre, pounced with the initials PIT A; two small handles incised as scallop shells. London date-letter for 1636-7. Maker’s mark apparently S and, above, a mullet between two pellets. 3 Diameter, exclusive of handles si ins. Seating: 18th-century benches with backs, on N. side of nave. Lych-gate: undated, but probably 18th-century.