House of mid 17th century date, in farmland forming a detached portion of the parish. The house is of two storeys, with a rear projection for the stair, its rubble-built walls are partly rendered and it has a modern slate roof The windows of the E. front have been enlarged and there are small square lights to the recesses in the S.E. The S. gable carries a tall square stack, capped and now rendered. The N. gable has recently been entirely rebuilt in brick. A former window on the W. now gives access to the I9th-century rear wing. 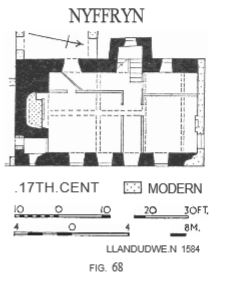 The roof timbers,the staircase, and all internal partitions are modern, and the fireplace in the S. gable is blocked by a modern grate. Some original ground-floor joists and ceiling beams remain. The main S. cross beam and secondary beam have richly-moulded chamfers (Plate 59), with leaf-stops to the former; the N. cross-beam, originally against its chimney breast, indicates the thickness of the former N. gable. Below the roof are stone corbels which indicate that originally there were three trusses.
Condition: good
SH25963717
5 vi 58
39 NE