As Madrun Castle, was the home of the Madryn family from the 16th century:1 the gate-house dates from the 17th century, but the present dwelling is almost entirely 19th-century. Incorporated in the walling at the back is a section of rough rubble, which is all that remains of the original building: there is no means of dating this. There is some 18th-century fabric in the E. wing. The gate-house, although not dated, is of a design found elsewhere in N. Wales,2 and must have been erected in the first half of the 17th century. It is a simple oblong structure bisected by a sloping
central passage with a plain segmental arch at each end; there is a small guard-room on each side. The single room on the first floor is now reached by an external stone stair. The battlemented parapet, the roof and many internal features date from the 19th century. I Diet. Welsh p. 609. 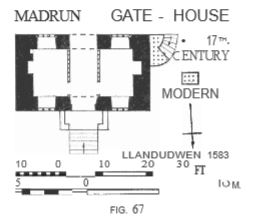