SAETHON (fig.73, Plates 45-6, 53). Two houses probably of the 16th century, facing one another across a yard, and among the outbuildings to the W., a barn of the 17th or early 18th century.1 The character of the E. house suggests that it is the earlier but there seems to have been no great difference in date.

The W. house (Plate 46) is of two storeys with attics over the main part, though not over the S. extension. Except for parts of the N. and S. gable-ends, the walls are cement rendered; where exposed they are of roughly coursed rubble with larger quoin stones. The plan suggests that the E. wall may have been partly rebuilt at its N. end. The roofs are covered with small coarse slates.

The original windows remaining are small and nearly square. The doorways have straight heads; two, blocked and so unaltered, retain rough dripstones. The roofs are steep, and the chimney stacks square and of medium height, with ledges and caps of trimmed slate.

The E. entrance is rebated and splayed; it seems to be the only original entrance to the main part, the present W. doorway having been formed in a later wall. Over the entrance, just below the sill of the first-floor window, is an inset tablet of gritstone, 20 ins. by 12 ins., blackened, which is inscribed in rustic capitals: EVAN SATHON 0 SATHON / A BRIODODD MARGRET/ 6 ED FERCH I MORIS WILLIA / MS 0 HAFOD GAREGOG ESQ AC / AGENHEDLODD BUMP 0 BLANT / AWR YN FYW . MAS . KS . LS 1666. 2 This date can hardly refer to any part of the main construction; but the tablet may well have been added with the window just above it, and perhaps with the enlargement of the others on this front, none of which can be of original proportions although the rendering of the walls conceals the extent of alteration. On the S. gable there is a slightly projecting chimney-stack set almost centrally. East of it is a blocked doorway with rough stone head under a dripstone. Over this, at first-floor level, is a blocked window, possibly early 16th-century, with plain chamfered frame and cusped head carved at the spandrels (Plate 53); apparently it was of trefoiled lights divided by a mullion which has gone. 3 West of the chimney stack there is a secondary doorway to the first floor of the S. extension; its jambs form a recess as wide as the S.E. window but its reveals are blocked; it is not high enough to have been formed by the removal of a window matching the other.

On the W. the S. window at the first floor, now blocked, is original and retains a decayed mullion. In the W. gable similar windows, with later wooden frames, light the stairs beside the great chimney. The other openings are enlarged or, in the addition to N.W. of the chimney, modern.

At the ground floor the main ceiling beams are still exposed and at the N. end a secondary beam also, all plain-chamfered. Against the S. beam is a fragmentary screen or partition of in-and-out boarding with a square-headed doorway, now boarded up, possibly 18th century. 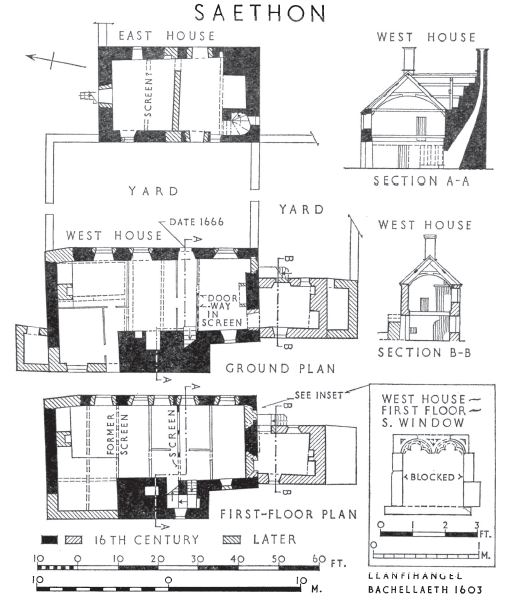 The line of another partition may be marked by the pair of beams immediately N of chimney stack. If so, the interior would have been divided into three nearly equal rooms each with a fireplace.In the central room the original fireplace exists though the bressummer has been encased. The N room has been reduced to form with the N.W addition a passage and two rooms, all ceiled in plaster. At the S of the central room a passage has been cut off leading from the front entrance to the stairs. The dog-leg stairway to the upper floor and attics has wooden stairs that may cover stone steps up to the first floor .

At the first floor the ceiling beams are similar but spaced to give two bays to each of three rooms that were once equal. Of the partition between the central and S.  rooms most of the studded plasterwork is still in position; where it is missing at the W. the shaved soffit of the beam marks the former doorway. Of the partition between the central and N. rooms only cuts in the beam exist. The wall-covering conceals the blocked openings in the S. wall, and may hide other original features such as a fireplace.

The attic floor was similarly partitioned into three by plastered screens of wattle and daub at alternate roof trusses, both screens being marked by studs let into the collar, the central pair forming a Low doorway. These two trusses have a cambered collar tenoned into the principals. The other three trusses have segmental arched braces in addition, springing from brackets of hollow mould4  which occur just beneath the attic floor as if the roof were meant to be open from the first floor; those at the centre and S. are intact (see section A-A), but that at the N. has been adapted to the extended roof at the N.W. Among the purIins and rafters, no longer in order, are some pierced for pegging. No wind-braces remain, though the principals have slots for them.

The S. extension, similar in build and roofing, was probably added later in the 16th century. It is of two storeys only, the upper being open to the roof. It was formerly entered at the ground floor by an external doorway on the E. which has a rough drips tone like that in the adjacent gable wall of the main part; it has been blocked likewise, and is obstructed by the stone steps up to the present first-floor entrance which must therefore be later. At both floors the window openings are nearly square and rather small. The chimney stack is square but larger than those of the main part and has a double capping of slate slabs.

The ground floor, now a semi-basement, is entered by a secondary opening in the adjacent wall of the main part. There are recesses for cupboards but no fireplace. The ceiling beams are roughly chamfered.

The single room at the first floor, now reached by external steps and entrance on the E., was formerly entered from the first floor of the main part on the N. through a doorway now blocked, already noted as a secondary opening. The S. end is recessed and has a small fireplace in the projection. The roof is carried on a single truss, arch-braced like those of the main part, and retains its flat purlins (see section B-B).

The E. house (Plate 45), now a bun, was of two storeys; it is of similar build on projecting boulder footings but is not cement rendered. The existing openings and those now blocked have rough stone heads, either projecting as drip-stones or flush. The windows at both floors are small and nearly square. The chimney stack resembles those of the main part of the W. house but has a larger ledge and capping. The slate roof is modem, as also the bell-cote at the N. end.

The ground floor is partitioned by a later stone wall which at the W. abuts the blocking of a former doorway. Formerly the interior was apparently divided into two rooms by a studded partition, the slotted head beam of which has been re-used at the S. and next to the fireplace, but for which there are still corbels 6 ft. to the N. of the present cross wall. In such a plan either or both of the opposite doorways now blocked could have formed entrances; those now in use must be former windows, cut down when the house was turned into a barn. The fireplace at the S. has a straight timber bressummer and a well-built chimney, like that of the other house though much larger. The circular stair well beside it is as well-built and retains all but the first four stone steps. There may have been another fireplace at the N. end, since opened at the back to make a low doorway.

The upper floor or loft is now reached by external stone steps at this end; the floor and roof-timbers have been renewed.

Although the E. house has been more altered than the W. house. the two have enough in common to suggest that they were loosely contemporary in build, and that in combination they constitute an example of the ‘unit system’ best seen at Parc, Llanfrothen, Merionethshire. 5

The W. barn (at 29363278), 41 ft. 6 ins. by 25 ft. externally, is built of coursed and mortared rubble on a high plinth, has very large quoin stones, and over the opposite doors rough stone lintels. The roof is covered with old purple slates, small and coarse. There are three splayed slits in each side and an upper doorway in one side. The floor is cobbled. The roof is carried on five trusses, with straight collars set high, and on flat purlins and rafters, all pegged together. 6 The barn has no closely datable features, but is probably a little later than the houses.